I don’t normally take pictures of just the sky, but this stuck me because of the amount of passenger airliner vapour trails criss-crossing above me forming a pattern of intersecting lines across from the Cumulus into the Cirrus clouds. Might of even been better in colour, but black and white film was loaded at the time. 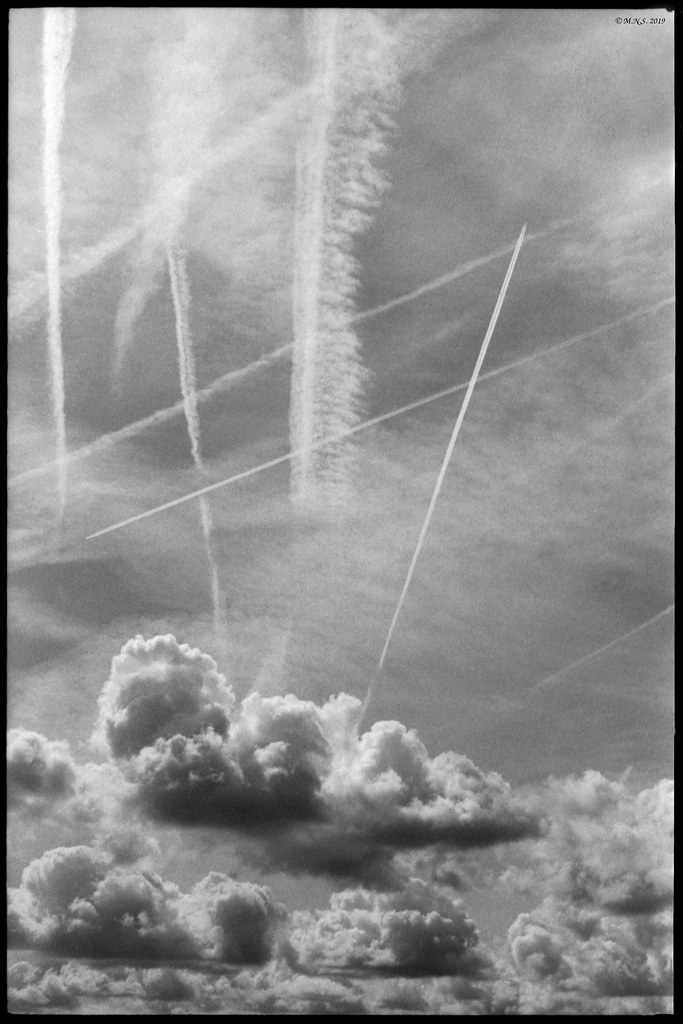 Taken over Barton’s Point, Isle of Sheppey, England with my Leica M4-2, Summicron 50mm f/2 on Fomapan 100 Classic film rated at 400, plus a yellow B&W filter.

This image again from Orbec, France. It interested me because of the shadow pointing at the number 3 as well as all the tones and textures on the old shutters.

Don’t know why I like this image but it just works somehow. Taken in the narrow back streets of Orbec, France, there are some lovely old buildings with cobbled streets. This is looking up the Rue des Osiers.

St Mary’s Church, Reculver, England. Also known as the Reculver towers, is the all that remains of St. Mary’s which was demolished with gunpowder in 1809 after year of disuse. Described on Wikipedia as described as “an act of vandalism for which there can be few parallels even in the blackest records of the nineteenth century”
This location has been photographed so many times, I think it would be impossible to count the images taken. On the day I was there, I observed three other people where taking pictures of the church.

Honfleur, France. Looking up Rue des Lingots, which is a narrow street in the old part of Honfleur, I came across these two oriental tourists. The woman in front of me was taking pictures of her friend with a mobile phone. As she taking images, the other girl was holding various model poses for her friend and both of them totally oblivious to everyone else around them. I also love the look from the man walking up the street, it just completed the picture for me.

Maybe the title should have been ‘Attention au chien’ anyway I spotted this little fellow in Bayeux, France. He or she looked somewhat old and was standing guard in this courtyard, staring at the world going by. I just couldn’t resist taking a frame of this scene.